Our school empowers students to organise themselves for daily school life by giving them the tools they need to succeed. Students are able to become independent, confident learners, which sets them up to navigate the complexity and challenges of the modern world.

This page is specifically for students currently enrolled at LaSalle Catholic College Bankstown and contains material thought useful by our student leaders and the student body, as determined via student voice initiatives. Be sure to check in regularly for college updates. 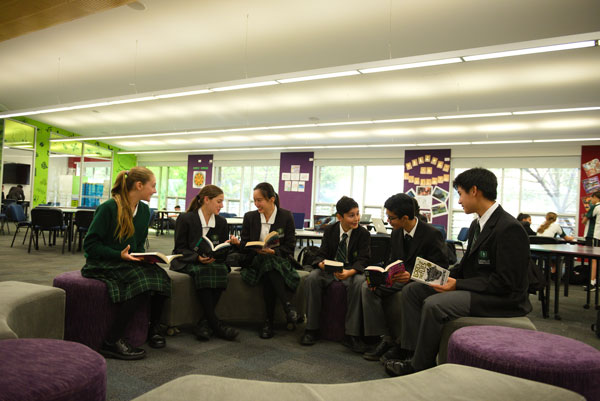 LaSalle Catholic College Bankstown has a ‘House’ system. There are four College Houses: Benildus, Miguel, Liesse and Turon. The names of these houses are all linked to our Lasallian traditions and heritage.

Benildus and Miguel are named after Saint Benildus and Saint Miguel, two Lasallian saints. Liesse is a French town, significant in the early history of the Brothers and Turon, a city in Spain, is the site of the martyrdom of nine Brothers killed during the Spanish Civil war.

Each student will be placed into one of these four Houses.

Students participate in a wide range of activities and competitions throughout the year, including sporting carnivals and social outreach activities. These activities promote in the students a strong school spirit, a sense of belonging to their respective House, and a stronger and closer school community. Students are encouraged to be involved in house based activities.

Pierre Romançon was born in 1805 in the village of Thuret in south-central France. He was so far ahead of his classmates in elementary school that when he was only fourteen years old the Brothers engaged him as a substitute teacher. Despite the objection of his parents, who wanted to keep him at home, and the reluctance of the superiors, who thought he was too short of stature, he was finally admitted to the novitiate.

From 1821 to 1841 he taught successfully in the network of elementary schools conducted by the Brothers out of the administrative centre at Clermont-Ferrand. In 1841 he was appointed Director of a school that was opening in Saugues, an isolated village on a barren plateau in southern France.

For the next twenty years he worked quietly and effectively as teacher and principal to educate the boys in the village and some from the neighbouring farms, many of whom were in their teens and had never been to school before. Small as he was, he was known as a strict but fair disciplinarian. In time the little school became the centre of the social and intellectual life of the village, with evening classes for the adults and tutoring for the less gifted students.

Brother Benilde’s extraordinary religious sense was evident to everyone: at Mass with the students in the parish church, teaching catechism, preparing boys for First Communion, visiting and praying with the sick, and rumours of near-miraculous cures. He was especially effective in attracting religious vocations. At his death in 1862, more than 200 Brothers and an impressive number of priests had been his students at Saugues. At his beatification, Pope Pius XII stressed that his sanctification was attained by enduring “the terrible daily grind” and by “doing common things in an uncommon way.”

Francisco Febres Cordero was born into a family that had always been prominent in Ecuadorian politics. Crippled from birth, he had to overcome family opposition to realize his vocation to be a lay religious, the first native of Ecuador to be received into the Institute. Brother Miguel was a gifted teacher from the start and a diligent student. When he was not quite twenty years old, he published the first of his many books, a Spanish grammar that soon became a standard text.

In time his research and publications in the field of literature and linguistics put him in touch with scholars all over the world and he was granted membership in the National Academies of Ecuador and Spain. Despite high academic honors, teaching remained his first priority, especially his classes in religion and for the young men he prepared for First Communion. His students admired his simplicity, his directness, his concern for them, and the intensity of his devotion to the Sacred Heart and the Virgin Mary.

In 1907 he passed through New York on his way to Belgium, where he had been called to translate texts into Spanish for the use of the Brothers recently exiled from France. His health, always delicate, did not easily adjust to the rigors of the European climate. Transferred to the junior novitiate at Premia del Mar in Spain, during a revolutionary outbreak in 1909 he supervised a dramatic evacuation of his young charges to the safety of Barcelona across the bay. Shortly after they were able to return, he contracted pneumonia and he died at Premia, leaving behind a remarkable reputation as scholar, teacher and Saint.

On May 10, 1684, the eve of the Ascension, John Baptist de la Salle gathered twelve of his Brothers in Reims and gave them a retreat until Trinity Sunday. They needed to reflect upon whether it was a good idea to form a community and take vows. Finally, the group endorsed the founder’s opinion and on Sunday, May 28th, they all met together and pronounced the vows of chastity and obedience in an oratory on the rue Neuve in Reims. The next day, after marching all night long, the thirteen pilgrims arrived at the Marian shrine of Liesse or All-Joy, about twenty-five miles north of Reims. They stood before Our Lady of All-Joy, renewed their vows, imploring the aid of the Mother of God. They chose her as the first Superior of their Institute. It was truly a pilgrimage of supplication and thanksgiving. The followers of John Baptist de La Salle placed themselves under the protection of Our Lady, proclaimed her Principal and Queen of their schools.

In the chapel, later dedicated to Saint John Baptist de la Salle, at the far left hand side of the Basilica, a marble ex-voto recalls this act of consecration of the Community made in 1684. Since then, the Brothers have maintained devotion to Our Lady of Liesse. In 1902, the Superior General, Brother Gabriel Mary, cured of a dangerous chest infection through the intercession of Our Lady, testified his gratitude by having the chapel redecorated and offering a stained glass window representing the Act of Consecration of the Institute.

In 1934 Turón, a coal-mining town in the Asturias Province in Northwestern Spain, was the centre of anti-government and anti-clerical hostility in the years prior to the outbreak of the Spanish Civil War. The Brothers’ school was an irritant to the radicals in charge of the town because of the religious influence it exerted on the young. The Brothers were known to defy the ban on teaching religion and they openly escorted their students to Sunday Mass.

On the first Friday of October, the authorities broke into the Brothers’ house on the pretext that arms had been hidden there. Father Inocencio, a Passionist, who had come the night before, was preparing to say Mass for the Brothers. They and their chaplain were arrested, detained over the weekend without trial, and then in the middle of the night were marched out to the cemetery where they were summarily shot. Brother Cirilo, the Director, was 46 years old and Brother Marciano, the cook, was 39. Brother Julián was 32 and all the rest were in their twenties. Aniceto, the youngest at 22, was still in triennial vows. Victims of the hatred and violence against the Church, witnessed by their death to the faith they so courageously professed and so effectively communicated to their students.